Wisconsin and the pain.

There’s no way to sugar coat this. A lot of progressive hearts got center punched Tuesday night.

Wisconsin Gov. Scott Walker (R) survived a furious campaign seeking his recall on Tuesday, emerging as the victor in a bitter fight over state budgets and collective bargaining rights.

Walker prevailed over Democratic challenger Tom Barrett, the mayor of Milwaukee, in the closely-watched campaign that stemmed from a fight in early 2011, when Walker drove a controversial bill stripping public employee unions of their collective bargaining rights through Wisconsin’s legislature. Walker won with 53 percent of the vote while Barrett received 46 percent, a slightly larger margin than when the two ran against one another in 2010.

Walker told a raucous crowd at his election night party that his survival was an affirmation of political “courage.”

“Tonight, we tell Wisconsin, we tell our country and we tell people all across the globe that voters really do want leaders who stand up and make the tough decisions,” he said.

Yes, gutting union rights, killing equal pay for women, and slashing education to the bone is now considered to be heroic. It’s like hearing Mitt Romney boast about his hairdressing skills.
Yeah, it was a shitty day. And the fact that the Koch Brothers are drinking aged whisky while getting their cocks sucked by gold plated hookers celebrating Walker’s escape from electoral accountability makes it even more shitty.
And while we can take some comfort that sixty percent of voters exit polled didn’t believe in an recall election for policy differences and that Walker may wind up facing indictment for white collar fraud, there is one prevalent fact we ignore at our peril. H/T to John Fugelsang. 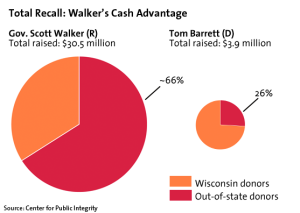 And unless “Citizens United” is overturned, this is our new normal. Being outspent in every election until the only one’s in office are in the pocket of the rich.
And yes, that will include Democrats. Some will happily take the money because that’s what they’re about.  And some will take it in order to try to do some good under the wire.  But in the end, the whole stinking system will become more corrupt than it already is.
This is the rest of our lives.
We have two choices.We either work for a government that is responsive to the needs of all the people or we watch as things fall apart faster than they are.  Taking bitter comfort in the fact that when the shit hits the fan, the rich will find that their shields of money will not protect them from the splatter.

G’Quan wrote, “There is a greater darkness than the one we fight. It is the darkness of the soul that has lost its way. The war we fight is not against powers and principalities, it is against chaos and despair. Greater than the death of flesh is the death of hope, the death of dreams. Against this peril we can never surrender. The future is all around us, waiting, in moments of transition, to be born in moments of revelation. No one knows the shape of that future or where it will take us. We know only that it is always born in pain.”
Citizen G’Kar (Written by J. Michael Straczynski.)

This is our pain.  We need to get used to it.

3 Responses to Wisconsin and the pain.